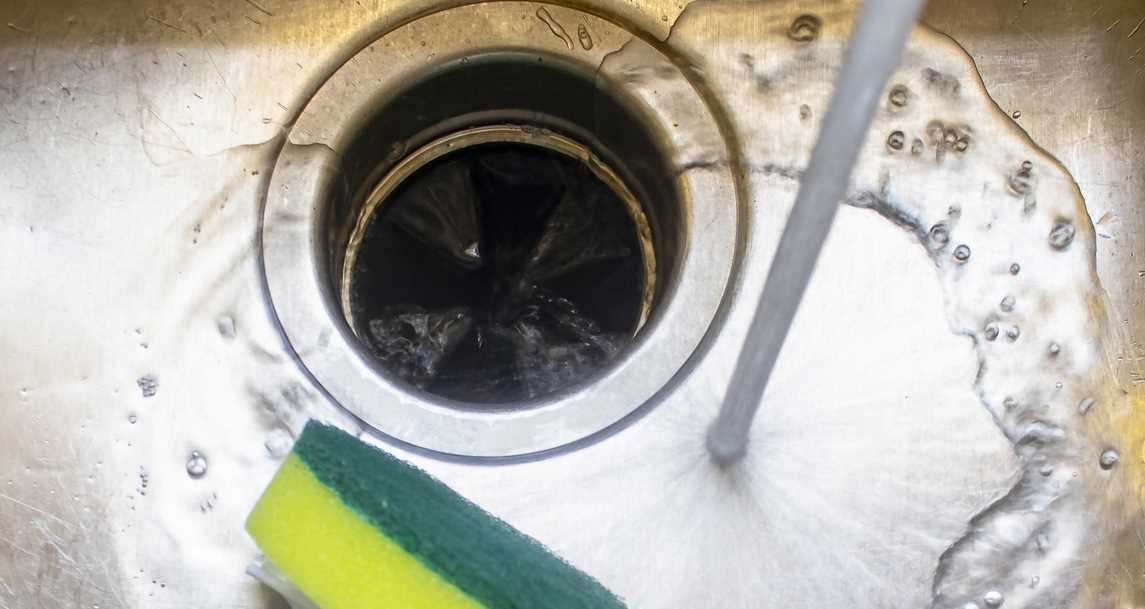 So your office kitchen stinks, huh? If you’ve taken out the trash and you’re sure nothing in the fridge has spoiled meaning the garbage disposal is a likely culprit. Although disposals are meant to be self-cleaning, food sometimes gets lodged in their grinders, causing odorous bacteria and reducing the efficiency of the garbage disposal and drain. Today we’re going to teach you both how to clean a smelly garbage disposal and prevent it from getting dirty again. Your nose and employees will thank you.

If you have a smelly garbage disposal, it’s because something (likely food) has gotten caught in the grinders. Try pushing the rubber siding aside and shining a flashlight down into the disposal to get a better look. It might be bits of food or it could be something larger like a peach pit, corn husks, or chicken bones.

1. To remove large materials, you’ll need to dig down into the disposal. Turn off the fuse that gives power to your garbage disposal first, so that there is no chance of your disposal turning on while you work (the grinders inside can be very dangerous). Then, shine a light down into the disposal and, using tongs or pliers, remove the guilty items and throw them in the trash can.

2. To clean the grinders, pour 2 cups of ice into the garbage disposal. Cover this with one cup of rock salt (if you don’t have rock salt, use vinegar). Turn on cold water and let the smelly garbage disposal run for 5-10 seconds. This will help dislodge any sludge or debris caught in the disposal.

3. To clear the drain, simply plug up the sink and fill it with 2-4 inches of water. Then, remove the plug and immediately turn on the garbage disposal, letting it run as the water flows through.

4. Finally, to be sure the garbage disposal is odor-free put a few handfuls of citrus peels (lemon, orange, grapefruit, etc.) in the disposal and run with cold water. You could also sprinkle down some baking soda, allow it to sit, and grind with cold water.

How to Prevent a Smelly Garbage Disposal

Garbage disposals are self-cleaning in theory, so if you use them correctly, they should always stay clean and odor-free.

First, be sure that your employees are always running the disposal long enough. Many people cut off the disposal as soon as the grinding sound goes away, but that allows food particles to stay behind and turn into bacteria-ridden, smelly sludge. The best way to use your disposal is to let it run for a full 5 seconds after the food has finished grinding. And of course, you should always run cold water while you run the garbage disposal; hot water can cause grease to liquify and drains to clog if used too frequently.

Second, make sure you watch out for what is being put in the garbage disposal. It’s not like a trash can so it won’t accept just anything. It’s always a good idea to put citrus and ice down the disposal, for freshness, and it’s never a good idea to throw down any of the following waste items:

If you and your employees treat your disposal as it was meant to be treated, you’ll never have a smelly garbage disposal again. Keep reading the Grime Scrubbers blog for more office cleaning tips from your cleaning services company in Springfield Missouri.